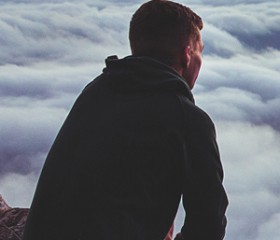 I grew up in an isolated region in New South Wales. My mother and father were alcoholics but I didn’t know it at the time, I just thought that was normal. At 12 to 13 years of age I started to drink, too. I’d moved to live with a foster mother in Wollongong and she was a Christian. She introduced me to Christianity.

I was sexually molested (not min my foster home, though) and I was made to believe that was acceptable behaviour by the perpetrator and that pornography was okay. There was more alcohol and drugs are fighting with my parents and so I went away on my own. I was in jail at 17 to 18 years for stealing and drink-driving. I’ve been in and out of jail since then (I’m now 48). I gave up alcohol when I was about 30 and met my wife to whom I’ve been married for the last 18 years.

My wife regularly comes in to see me. After I met her, I took up drugs again which included speed and amphetamines but she’s never done drugs. I got tired of being in and out of jail. I’ve done all the courses and the rehabs but nothing changed.

Then I picked up a bible in my cell and said “what the hell have I got to lose. I’ve tried everything else!” As usual, like with drugs and alcohol, I throw myself into everything that I do. Every weekend I kept getting more and more hungry and thirsty for knowledge of Jesus Christ. When I mixed with other believers, I felt at peace. Chaplains give me someone to talk to and explain things. I can now talk to other people in here about God.

Alan’s note: I first met Geoff about 11 months ago as one of the most hardened -looking criminals to ever come into my church service and I wondered where things were going to go. After I’d given the gospel the first one to respond was Robert and he has grown from there until just recently he said to me, “God is telling me… the Holy Spirit is telling me to tell the others about Jesus.”

In the last 6 to 8 weeks, Geoff has introduced I think somewhere around 4 or 5 offenders to Jesus and they have made that decision to be a follower of Jesus. Geoff has said to me in the last couple of weeks ‘I can now talk to other people in here about God. I am now positive that when I get out of here there will be people out there to help me. I feel they may be people who would want me and for me, they would be my Christian family. I’m a lot more positive to not commit crime again.

Jesus is finally showing me how to be responsible and to own what is mine. God has opened my eyes up to what I have done and what I can do.

God can change your life. This Jesus stuff, this Bible stuff is real and there are other influences around that in the past have just been a load of BS.’

It wouldn’t have been more than 6 months ago when I was talking to Geoff and he was enthusiastically talking about getting out and cooking up drugs again but praise God that seems to be changing greatly.

*Geoff is not his real name