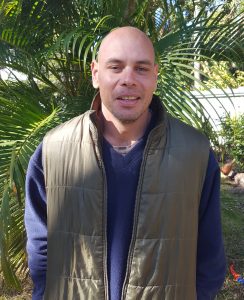 “The tongue has the power of life and death.” Proverbs 18:21

This is a story about the power of words.

Andrew grew up in a loving home but his childhood was marred by the damaging words of his father… “You’ll never amount to anything.” “You’re worthless.” “You’re nothing.” Andrew carried these words inside of him until they seemed to intertwine with his very being. “I’ll never amount to anything.” “I’m worthless.” “I’m nothing.” And so, he lived his life as one who was worthy of death.

Drugs, alcohol, sex and pornography were his food and anything good that came into his life, he pushed away, truly believing he didn’t deserve it.  Then one day, a lifetime of self-loathing and offence culminated in one moment of anger that saw him imprisoned for assault.

He was released on parole but, without any family support, he found himself sleeping in a boarding house. Surrounded by ex-inmates, Andrew was aware of a dark presence lurking around every corner, where dark things were taking place. Feeling drawn into the darkness, a glimmer of light drew him out and he found himself inside a church, where a pastor ministered words of life into his soul. Andrew felt the presence of God, but, determined to sort out his problems on his own, he soon found himself back ‘inside.’

But this time it was different. Sitting inside his prison cell, for the first time his eyes were truly opened. A veil lifted and Andrew had a revelation. Suddenly, he was inexplicably aware that he had only been able to see dark things. The faults in others. The mistakes. The darkness. But now, he could see the good, like a newborn opening his eyes for the first time. He felt the Lord say to him “I have given you so much” and for the first time, he knew that was true.

Prison Chaplains were there for him as he embarked on his new journey of faith. They were a great example in their ‘God walk’, and they were able to answer all his questions.

Andrew is now a free man in more ways than one. The past wants to cling to him but he’s allowing God to fill up those hollow places once inhabited by darkness and those words that once held him prisoner, no longer have a stronghold. Replaced by words of life and light and hope.  He’s meeting with other God-followers now, and he’s part of a home bible study group. And he’s writing a novel that shares a bit of his faith journey, so watch this space!

Andrew describes Prison Chaplains as ‘God Warriors!’  He says: “You have to be a certain kind of person to enter a place filled with negative attitudes, drugs, offence and darkness bristling beneath the surface.”  We reckon you’re right, Andrew, they are absolutely ‘God Warriors!’ Every single one.