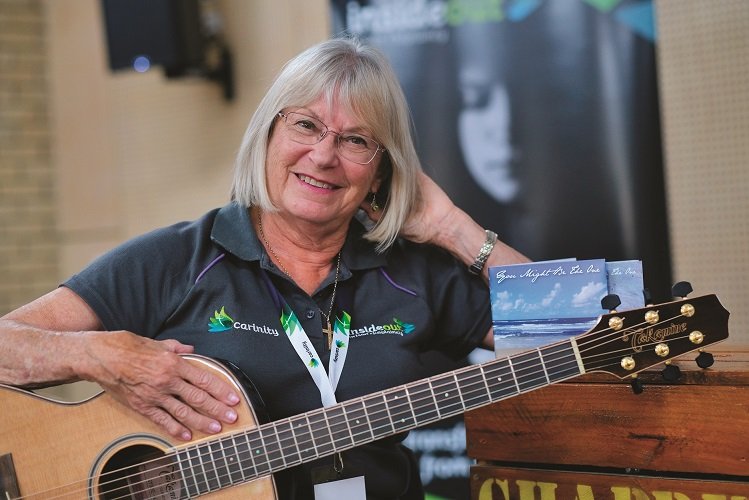 Sue has been a volunteer prison chaplain with Inside Out Prison Chaplaincy for four years, but decades prior, she was a popular singer who entertained audiences around Australia and abroad.

Sue started singing professionally at the age of 15, the start of an entertainment career spanning 35 years.

Under the name Toni McCann she released garage pop-rock singles such as ‘My Baby’ and the theme tune for Australian music show Saturday Date. Changing her name to Toni McRae, she recorded her first album Banjo Flat and married musician Royce Nicholas.

Performing together as Toni & Royce, the duo released three albums and several singles, performed for troops at military bases in Far East Asia and Europe, played in UK clubs, appeared at the Montreux Jazz Festival in Switzerland, and toured Queensland Arts Council children’s programs around Australian schools for nine years.

Now Sue has released her first original music since the 1980s, a new EP of original Christian songs entitled You Might Be the One.

“I have had many challenges in my life, juggling family, children and work. Some of these situations inspired me to write about my testimony and my faith. During the last two years I felt a need to put some of these songs on disc so that I had something that I could share. I hope this will encourage my family, my friends, and the people that I meet,” Sue said.

Sue has enjoyed using her love of music to sing at church services inside correctional centres. Her prison chaplaincy work inspired ‘Long Way Back’, one of five songs on her new CD, all of which she wrote.

“Working as a volunteer with Inside Out Prison Chaplaincy, I’ve realised how difficult it is for many former prisoners to fit back into the community after their release. Without adequate support outside, many of them return to prison,” Sue said.

“I wanted to share my faith through my music, as I have seen first-hand that finding faith ‘inside’ has been a turning point for many and has brought hope and healing to others, by building strength and resilience from the ‘inside out’.”

You can order a copy of Sue’s You Might Be the One CD by emailing lee.oliver@carinity.org.au.