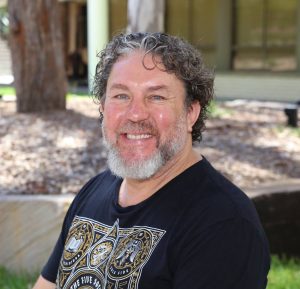 Hadley was born in South Africa and as a teenager he started drinking heavily and got into a lot of trouble. “Once I was beaten to within an inch of my life by five men in a drunken brawl, and another time also while under the influence of alcohol, I crashed my vehicle into Central Prison in Pretoria, smashing the bones in my face in seven places.”

In 1983, Hadley was injured in a bomb explosion that killed 19 people and injured more than 200. He was under the influence of drugs at the time, but by God’s sheer grace he became convinced that it was the last time God would save his life. This realisation would result in a deep spiritual change. “Throughout my years as a juvenile delinquent Christians preached the gospel to me and by the end of that year, while at a barbecue, God convicted me of my sin and granted me repentance and deliverance. My life changed drastically.”

With such a testimony, it’s no surprise that Hadley would serve God in a way where his testimony could be powerfully used to bring others to Jesus. He tells us how he become interested in Prison Chaplaincy. “After my salvation I ministered in a ghetto area in South Africa for 10 years amongst drug addicts and prostitutes. They invariably ended up in prison and I would visit them.

An elder at church suggested I become a part-time chaplain for the Baptist Church, which I did. About 12 years after migrating to Australia a number of random incidents triggered once again an interest in the spiritual condition of prisoners.” After this sequence of events, one evening at a conference, the director of a Bible correspondence course for inmates approached Hadley three times and encouraged him to contact IOPC to become a prison chaplain which brings him to us today.

What motivates Hadley to volunteer as a Prison Chaplain? He replies, “I think it’s the knowledge that I have done so many things in my life that could have landed me in prison, and also being fully convinced of the fact that God can and does change lives through the power of the Gospel of Jesus Christ.” Hadley is certainly living proof of this truth!

It’s quite evident that Hadley really enjoys being a prison chaplain. “God has given me a real love for the inmates and being able to bring hope to people who are hopeless, and sometimes seeing their lives change is very rewarding.”

Seeing true change in an inmate’s life should certainly be an encouragement to us to continue supporting the work of our IOPC Chaplains. Hadley recalls one particular inmate who had spent most of his life in prison, who angrily challenged him about the very existence of God after a family member committed suicide. “[The inmate] went through stages of deep depression. But eventually the gospel message convicted him and he committed his life to Christ. He started reading the Bible and enrolled in a Bible correspondence course. He now reads and remembers the Bible stories and understands the intended meaning thereof. Often when we visit him he is waiting with his Bible ready to discuss some new understanding or ask a question.”

But the story doesn’t end there, Hadley continues, “He is submitted to the will of God and says he doesn’t care whether he gets out on parole or not, as God knows what is best for him. Pray that God continues the good work of grace He has begun in him.” Indeed, please pray with us for Chaplains like Hadley, and for the inmates that they reach out to; pray that God may continue to be at work changing their lives through the gospel for His glory.