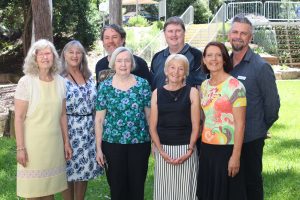 Inside Out Prison Chaplaincy has welcomed the first graduates of Carinity’s new Certificate IV in Chaplaincy and Pastoral Care.

The first eight graduates of the course include four Prison Chaplains, who serve in correctional centres at Ipswich, Woodford, Cairns and Gold Coast.

Chaplaincy is experiencing a growth surge, with Carinity seeing a 10% increase in the take-up of chaplaincy positions over the past year, and strong engagement in chaplaincy training.

“Chaplaincy is something God called me to. It’s the knowledge that I have done so many things in my past that could have landed me in prison, and also being fully convinced that God can and does change lives,” Hadley says.

Reverend Don McPherson from Carinity Chaplaincy and Mission Services says the increasing demand for Prison Chaplains is being driven by a growing realisation of the benefits of caring for people holistically and by rising incarceration rates.

The number of adult prisoners in Queensland corrective services custody increased by 6.6% between February 2017 and February 2018.

“Men and women who are incarcerated are among the most marginalised people in our society, and at the lowest point in their lives,” Don says.

“Chaplains provide encouragement and support to people in times of personal need. They provide a listening ear and assist people to access spiritual resources for living and for facing challenges.”

Anyone interested in becoming a chaplain can visit carinity.org.au/carinity-communities-chaplaincy or call 07 3550 3719.