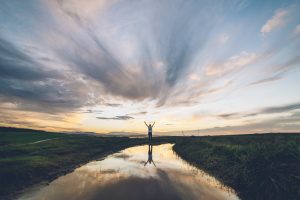 “Go tell the disciples and Peter that he is not here, he is risen,” said the angel on resurrection morning.

It’s those two words, “and Peter” that get me. I think maybe there needed to be two errands: one to the place where the disciples were gathered, and one to the place to which Peter had retreated in shame.

He had denied his Lord three times, even after he rejected Jesus’ prediction that he would.

Peter was crushed. He felt worthless, not good enough, a failure. But Jesus had known that he would.  His prediction to Peter was not meant to stop him from this failure. He was not saying, “Watch out – don’t do it!”

Jesus confidently predicted that Peter would wilt under pressure. He wanted Peter to know that despite his impending failure, he was still a candidate for “Disciple of the Year.”

So he made sure the angel told people to search out Peter and tell him to pick himself up and get back in the game. There was still work to do.

Many of the people that Inside Out Prison Chaplaincy chaplains work with have been where Peter was. They too need to hear the words of the master encouraging them to give faith another go.

Your ongoing support can keep that message going.