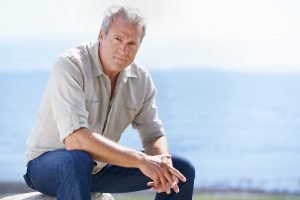 Darren* became an alcoholic and drug addict at age 16. It was his way of coping with his parents’ divorce and living with his dad’s own addiction.

Eventually, Darren’s addiction cost him a relationship and he lost contact with his daughter. She was just two years old when he had seen her last. Whenever he called, his ex-partner would hang up the phone so he couldn’t hear her voice.

He didn’t know there was a God who loved him until his mum became a Christian and told Darren about His goodness. She said: “Ask God to remove your addiction in His time.”

It was years later when his mother’s prayer was answered. But not as she expected.

Darren had stopped caring about himself. He didn’t shower, brush his teeth or even change his clothes. He and his new partner were taking ‘ice’ and one night, Darren was filled with a drug-fuelled rage. A dark force overtook him and he became aggressive and violent. He attacked his partner and that night was arrested and charged with grievous bodily harm.

At the watch house, he was reminded of his mum’s words. He cried out to God from inside his prison cell and instantly his craving for drugs and alcohol vanished, never to return.

In prison, Darren gravitated toward the chaplains, like a moth drawn to light.

He was overcome with shame for what he had done to his partner and couldn’t even look anyone in the eye. But chaplains shared God’s love with him and explained that his past wasn’t his identity. His true identity is ‘loved child of God.’

Darren completed a DVO course and found healing from his past. He attended bible study every Friday night and soaked in God’s word.

While he was in prison, he was surprised to receive a letter from his daughter. She was 20 years old, lost, lonely and taking drugs herself. She desperately wanted to connect with her dad, despite everything her mother had said about him. They wrote back and forth throughout Darren’s time in prison.

Darren went into rehab upon his release from prison and graduated late last year. He then finally got to see his daughter in person. They hugged each other and he asked if he could pray for her. He left her with a daily devotional.

The next time they spoke, his daughter said: “Thanks for telling me about God.” Her life was completely transformed as well. She’s found her true identity and now she’s studying childcare.

Today, Darren is working two jobs and he’s surrounded himself with Godly people, hosting a weekly home group for men and he’s a committed member of his local church. They don’t judge him. They just love him and encourage him daily.

Most importantly, generations of drug abuse have ended. Darren and his daughter and living free.

“God, your God, will restore everything you lost; he’ll have compassion on you; he’ll come back and pick up the pieces from all the places where you were scattered” Deuteronomy 30:3 (MSG).

Darren can’t praise the chaplains enough for going into a dark place to spread the Word and attract people to the light. He said: “There are so many in prison who don’t know that God loves them, until a chaplain shows them God’s love.”

Everything Darren had lost has been restored.

* Name has been changed

Praise the Lord, Glory to the King!