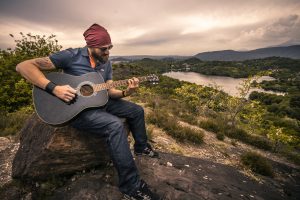 To most of us, prison is the antithesis of freedom, but for Steve*, it’s where he discovered true freedom for the first time.

Steve had been a Christian for a while, but when his marriage ended, he suffered a crisis of faith.  Confused and depressed, he turned his back on Christianity and the casino became his church. Surrendering to the grips of addiction, Steve couldn’t imagine life without gambling.

It was at the casino that he met a wealthy, high-profile woman and they began a relationship, meeting at the casino three or four times a week.  Steve was working hard but earning little. He was interested in the stock market and did some courses in hopes of making a career out of it.

His girlfriend gave him $100,000 to kickstart his new career in the share market, but in a moment of weakness, he blew it all at the casino.  It took him nearly three months to work up the courage to tell her what he’d done.  She was furious at his betrayal of her trust and he was charged with fraud, serving one year in prison.

Reflecting on his time in jail, Steve said: “It was one of the best years of my life. It helped me see the reality of life. Helped me press the reset button.  And Prison Chaplains played a key role in helping me make a fresh start.”

To him, the weekly Chapel was a shining light in a dark place. He believes that without it, a lot of prisoners would lose hope.  The first time he attended a Chapel service, the Prison Chaplain wanted to teach the inmates the actions to a song but realised he couldn’t play guitar at the same time. Steve raised his hand and offered to play guitar for him.  He only knew five chords but that was enough to be able to play the song.  It was called Dropkick Me, Jesus, by Bobby Bare:

Dropkick me, Jesus, through the goal posts of life

End over end, neither left nor to right

Straight through the heart of them righteous uprights

Dropkick me, Jesus, through the goal posts of life

Make me, oh make me, Lord more than I am

Make me a piece in your master game plan

Free from the earthly temptations below

Bring on the brothers who’ve gone on before

And all of the sisters who’ve knocked on your door

All the departed dear loved ones of mine

Stick them up front in the offensive line

Oh, dropkick me, Jesus, through the goal posts of life

Steve played guitar at every Chapel service from then on and renewed his love for music.  The guitar he played was old and falling apart, so he started praying for a new one.  Not long after, one of the prisoners who was about to be released gave him his own guitar.

Today, Steve’s been out of prison for a year. He’s doing volunteer work with homeless people in Beenleigh and helps ex-inmates integrate back into society.  Steve has also joined the worship team at his local church, using his love for music to help others find freedom in Christ.

*Name has been changed.